I have an older laptop, so I had to uninstall Spotify at the beginning of 2018 because it was crashing my laptop. Since I don’t have Spotify Premium, I thought it wouldn’t be worth it to have the app on my phone. Last month, however, I decided to download Spotify again (for my phone, that is-I’m not trying to kill my laptop). I’ve missed being able to discover new music, so I’m glad to have Spotify back in my life! The ads can be a bit annoying, but I honestly don’t mind them as much. Once I get into more of a comfortable financial situation, who knows-I might get Spotify Premium in the future. If I could play whatever song I want, wherever I want…that would be insane!

Prior to Spotify, I primarily listened to music that was already downloaded on my phone (which is mostly Halsey) and music on YouTube. I also tried Pandora every once in a while, but I always listen to the same channels and would always hear the same songs. While I love the music that I already know, it doesn’t inspire me creatively. New music and random mixes seem to do the trick though! I love discovering new artists AND singing along to songs that I know every lyric of.

When it comes to music, I love songs that have inspiring messages to them. Especially since it’s the start of 2019, I’ve been in the mood for songs that hype me up and keep me motivated! I have many goals for 2019, and I would really like to accomplish them this year! I’ve been creating playlists like crazy since I’ve re-downloaded Spotify (playlists are so fun!), but here are some songs that have been rocking my playlists lately. 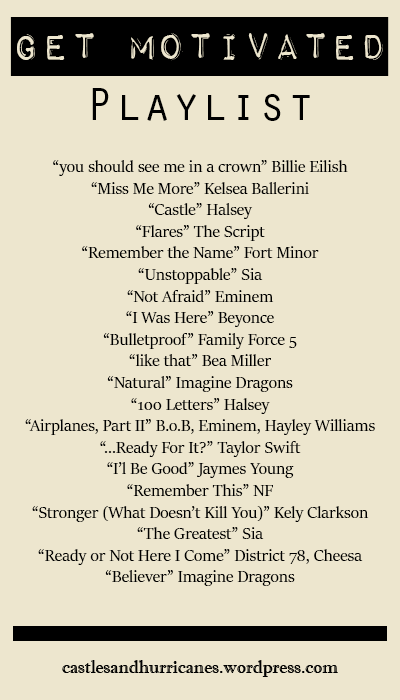 I hope you enjoy my playlist! What songs have been motivating you this year?

4 thoughts on “Get Motivated Playlist”